The proposed new Bouwkunde is an environment where people can live architecture to its full potential. It is a stimulating environment which encourages users to be active, critical and initiative within an inspiring learning environment.

The building concept is based on the idea to see all activities but not directly touch them. This is already revealed from the outside. Coming from the TU campus the new Bouwkunde contributes to the campus in an own unique way. Two distinct autonomous layers give the impression of spatial schizophrenia: an immense factory hall like a civilized IKEA, with a roman city structure on top of it

On the glazed façade of the building, a curved line shows its traces. It’s the annunciation of the hilly landscape inside, viciously stopped by the Euclidean shape of the hall. Where the curves of the landscape touch the ground of its surroundings, entrances are unmistakeably formed.

Big trucks enter the almost subterranean storage spaces underneath the hills. Inside the hall the production of architecture is under full construction and process. Swarms of students are working on the terraced hills, creating their own architectural masterpieces in a variety of flexible and heterogeneous studio spaces. The intense working atmosphere gives the feeling of being one community within the buzzling and hectic world of Bouwkunde.

Not everything is shown at once, but a general picture is clearly given. Calmed down from the first overwhelming impressions, the elevated city suddenly shows a direct nearness and connection to the landscape. Its presence and relation is felt literally by the dynamics of the hall’s ceiling. Several volumes punch through the roof, manifesting an inverted city. New developments and materials are tested in the labs, almost touchable from the top of the hills. Conferences and special exhibitions are taking place in serene untouchable objects above the valleys, constituting an overwhelming visual tension between the two worlds.

Five big cores strengthened with knowledge from the past are placed on central positions on the landscape. They provide a functional connection between the two worlds, in the form of the library, the model space, the restaurant and the auditorium, interwoven with all the studio spaces. The big working factory has become a learnscape.

Along the way up several lecture halls are interwoven with the vertical transport, where students and teachers exchange knowledge in a dynamic and informal way. The cores emerge on the central squares of the city above and extend to towers, visible from both the elevated city and the landscape underneath.

These towers have special functions on top. In the bouwpub there is a celebration going on. Stylos has changed its tower already for the second time this year; in the Delft School of Design a congress is in full process, where in the exposition pavilion graduates show there work. In the last tower the dean looks from his penthouse onto the elevated city.

A 7 by 7 meter grid that forms the structure of the roof of the hall, also defines the grid of the city. It’s an ever expanding city; students, teachers, recent graduates renting studios: they all can fill the grid according to their own initiatives. It makes the city flexible; exchange of functions happens in a natural way. Suitable for a wide range of activities, the city extends beyond the typical Bouwkunde program and incorporates the outside world. Offices of teachers, dwellings and ateliers for graduates and professionals, related companies and several leisure and supportive activities get their place.

The city is a 24hour industry. When the hall is closed the city doesn’t go to sleep but delivers a variety of activities: it’s an expression of architectural life. On the scale of the public layer of the street, direct and informal relations between the functions become likely.From one of the slim concrete slabs that are adjusted to the roads of Delft, a student bikes through the streets. On his right-hand he passes a young professional who is busy repairing his own roof due to bad detailing. On the left a student takes his breakfast enjoying the first sunrays, after working all night long. Just in time for a meeting with one of his graduates, a teacher runs to his own office with a cup of coffee and a sandwich in his hand, fresh from the bakery around the corner. He almost gets hit by a car, busy searching for a free place along the streets. After stalling his bike, the student walks via the exposition to one of the cores for a lecture.

This concept stretches the limits of Bouwkunde as an institute to a new potential. The building as a whole develops in section from the idea of an institution with fixed values and ideologies to the idea of an initiative, dynamic and stimulating environment that exceeds the academic world end extends to the one of practicing architecture in reality. The appearance and the way the building works is subject of constant change; in daily use as over time, in form as in function. The extreme flexibility of the concept makes the new Bouwkunde ready for its own future. 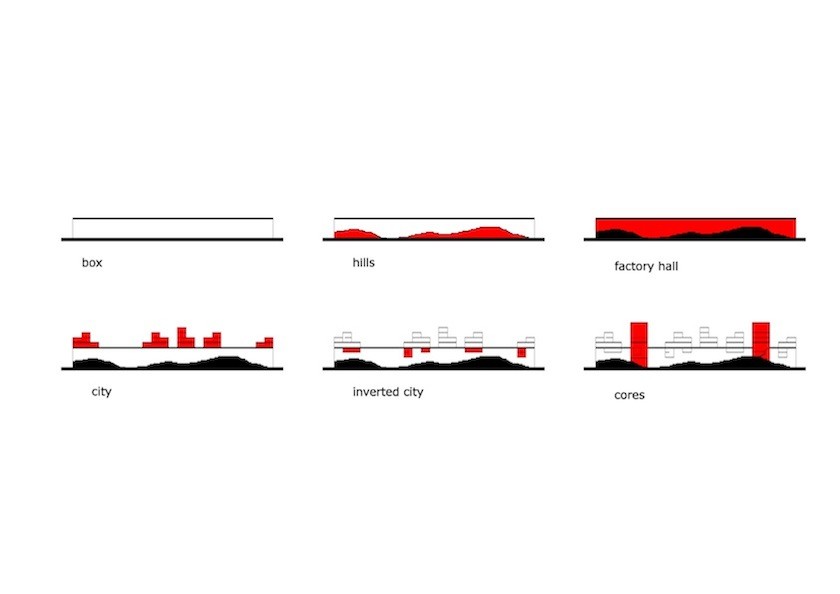 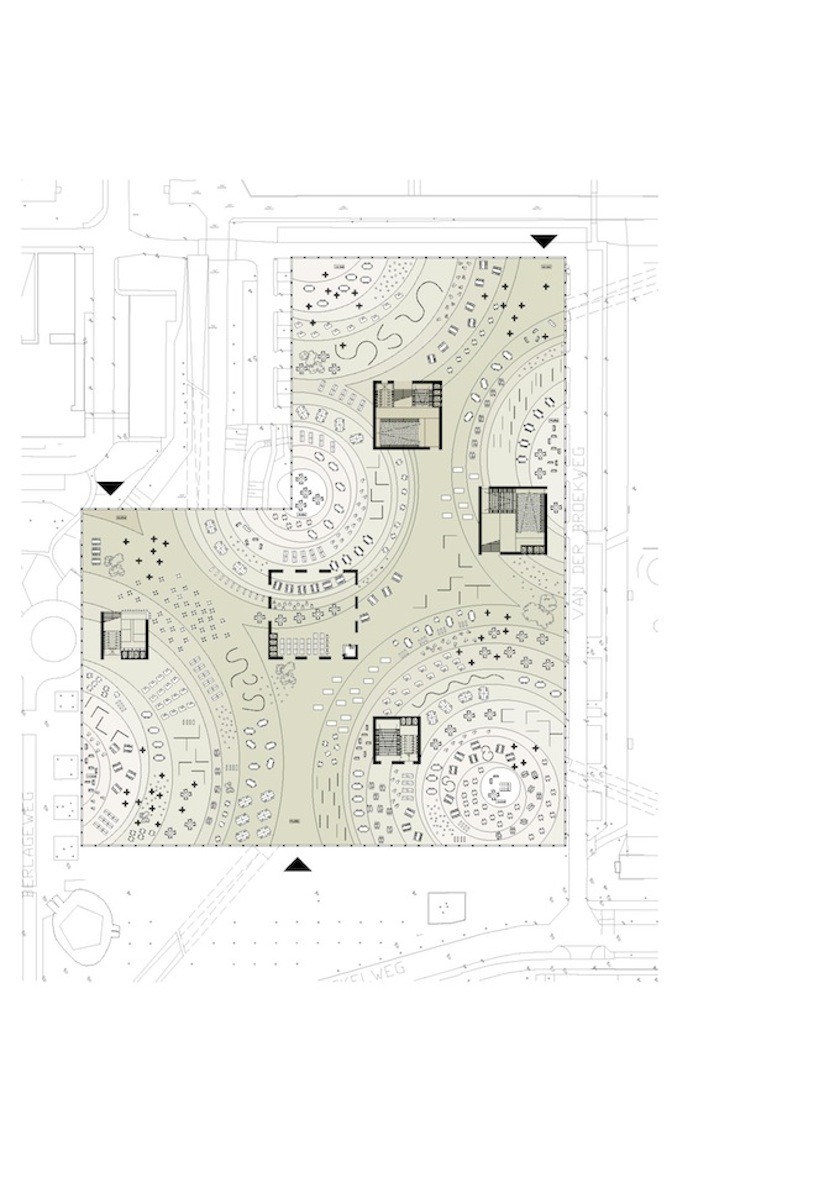 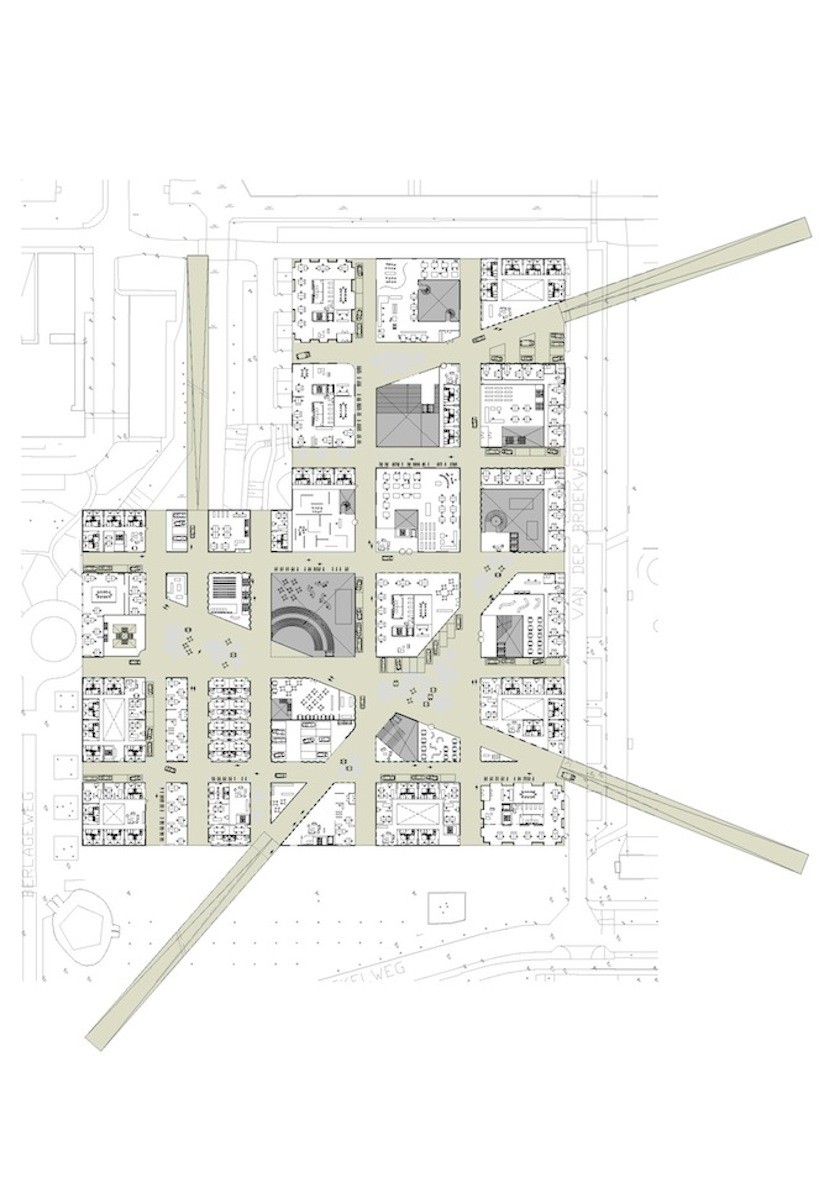